In the desert on a horse with no name.

Howzit all. So due to my illness I was not able to walk this year. However I did still manage to get into the desert for a few weeks. So a bit of rehab for me 😉 Richard who is a family friend and was supposed to be my backup driver for the walk came up from Sa and did the hard job of looking after me for our trip.

There were a lot of new roads for us both. Kuiseb was a star all the way and it was some good bonding time for us. She is still pining for Hagler and of course I am still sad but “WATCHA GONNA DO” 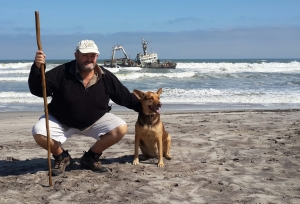 and found this awesome camp site on the top of a hill. 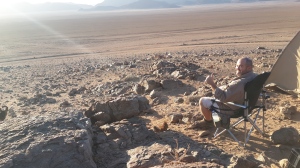 It was not windy really! 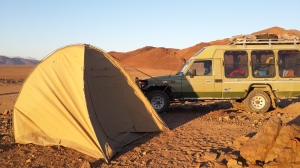 But we did have a spectacular sunset and sunrise! 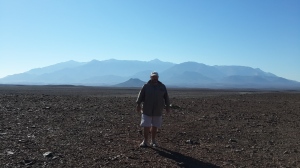 Then we went via the Hugab River and stayed in the Huab River. Kuiseb clearly was not talking to me during the sunset!

Unfortunately my roof rack gave up the ghost with all the wear and tear on the vehicle so I decided to head to Tweyfellfontein country lodge to get it sorted. This took us through desolation valley.

Needless to say desolation valley has the only water for a few hundred km and this was the outcome! 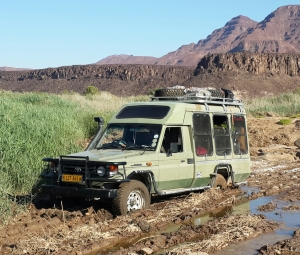 We got seriously bogged down and had to use the satellite phone to call a lodge to come help us. They ended up not arriving but this great couple happened to be driving into the valley and helped us get out. 6 hours later!

We returned the favour a few hours later when a Kalahari Ferrari had a flat tire.

They don’t call me Elephant man for nothing!!

I then made the fatal error of not having enough cash on me. So via Palmwag, Sesfontein and a few grumpy lodge managers later we arrived in Warmquelle. We swum in this awesome waterfall and I even jumped from the ledge. However I did come off with a grazed shin and sprained toe and finger 😉 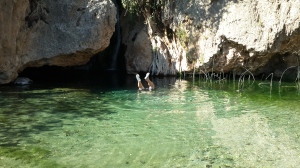 The next morning I met a friendly Herero lady. 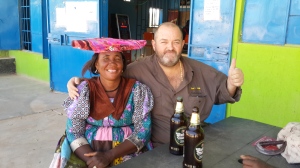 Opuwo. They have an amazing sunset view and a pretty good restaurant.

After replenishing my cash supplies and some fuel we headed to the Marienfluss. A really challenging way to go is via the Van Zyl’s pass. We got to the top of the pass in the late afternoon and found a great campsite there.

Before dinner I decided to do some river bed driving and got stuck. Kuiseb decided she was not helping us get out! 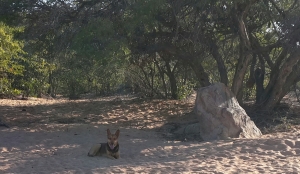 The camp manager brought his family to meet us in the morning! 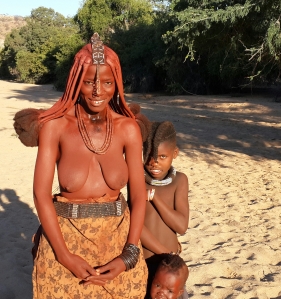 Halfway down the pass we scratched our names in a rock.

At the same time I did “selfie with Himba”

There were a few challenging sections!

First view of the Marienfluss!

In the Fluss as the locals call it 😉 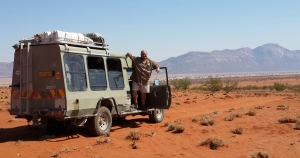 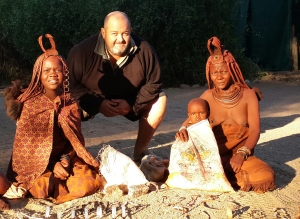 We stayed on the Kunene River and watched an awesome sunset. There are new owners there and they were very welcoming. Ryan also gave me a good lesson in chilies!

Richard who did all the hard work. 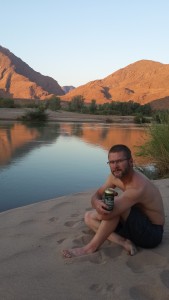 Met another walking man on the way South. 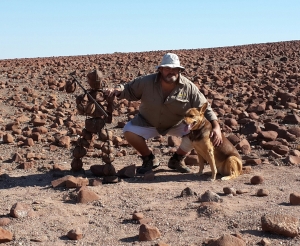 Oh yes and some Elephant 😉

I also got to use my Solar equipment. Thanks Derek and Grant.

We then headed via Sesfontein

Stayed at Aba-huab again. Funnily enough I bumped into Julian & Steph from the GCF at the Vet fence. They were off doing some filming with the BBC. We could not chat to long due to a “traffic jam” at the fence. 4 or 5 cars. Bwhaaaa. We also saw Thorsten & Lynn from Namtib camp in the South at the camp site and they are doing horse safaris.

Last night was at my spiritual home the Spitzekoppe. I slept next to the fire, under the stars with my Pup and it was Glorious. Next morning was coffee and sunrise on Barry’s rock. All in all it was a great trip. Once again I realise that I have to get a lot fitter to do this one and well best I get my A into G! So not an update of my walk but now you have an idea of were I will be going. I hope you will follow and talk to you closer to the time.